While this story is based on real events, small elements have been left up to my interpretation due to the lack of police evidence.

"Don’t get involved with that married man," my sister used to say.

I can still hear her warning ringing in my ears.

I am driving back to my home on Staten Island late on a gloomy Wednesday evening after work. My day as a receptionist in New Jersey was long and tiresome, especially after talking with Charles over the phone just before leaving. Every time we talk it’s like the distance between us grows exponentially. Oh, how he irritates me sometimes. Where did the love go? But the conversation I wanted to have with him couldn’t happen while I was at work. We needed to talk things out face to face.

The drizzling rain outside is tapping on my windshield a little harder now, but the radio is playing, so the noise doesn’t bother me much. At least being alone right now gives me a chance to think. I still need to unpack a few things from my trip last week that I took up to Woodstock with Charles. No doubt in my mind he told his wife and son that he was leaving for a business trip. Is that what I am to him? Business? Well when I got back, I told everyone what a terrible time I had - and it was true. Our relationship isn’t like what it was four years ago. Back then, I didn’t know he was leading a double life. Charles was charismatic, attractive, and seemingly available. But now I can only see a liar filled with jealousy. These terrible rumors I’ve been hearing, can they be real? I wish our dynamic wasn’t so complicated.

The Outerbridge Crossing is far behind me now, and I pull into the driveway of my single-family house on the end of the street. Once I’m inside, I flick the yellow overhead light on, and my dog is barking excitedly. I feel so relieved to shed the weight of the day and finally exhale to decompress. At least my dog is happy to see me. This little home feels lonely with just the two of us in it, but soon I’ll be moving to a better neighborhood with a roommate to share conversations with. I really can’t wait.

My dog and I are sitting on the couch in the silence for a minute before I reluctantly think about Charles. I should give him a call back now. My hands begin reaching for the house phone as I’ve done a million times before - but wait - I’m supposed to have dinner tonight with my soon-to-be roommate and pay the landlord for the new apartment! I’m confident once I pick up the phone, Charles is going to suck me out into grabbing a drink. Do I want to be drinking when talking about something this serious? Something this…evil? It’s too late, I’m on autopilot and have already dialed his number.

He’s picked up the phone after the first ring. I know this tone of voice. He’s angry with me, and I can hear it in the way he says my name. There’s an emphasis at the end where there shouldn’t be.

“Charles,” I start, “I’m sick of avoiding this conversation. You never want to listen to me when I talk about your wife or her missing sister Elizabeth Bu—”

“You are filling your mind with delusions again! Have you stopped taking your Lithium?”

He's cutting me off, using my recent diagnosis against me to poke holes in my thoughts. I can't stand when he does this. Charles is angry in the same way he has been all those times before when he's hit me. I can almost feel his hand striking my face through the phone. But I know I’m not crazy.

He follows up in a slightly calmer tone, "Look, baby, I don't want to fight with you. If this can't wait another day, we can meet in a bit. I'll see you at the usual spot by South Shore? Drinks on me." Just like I thought.

The phone call ends almost as quickly as it started. I still have a knot in my stomach. I'm not the type to cancel important plans for Charles, but he wouldn't even let me finish Elizabeth's name, that must mean something right? Elizabeth Bump, his wife's sister that went missing in 1993 right after Charles got out of prison. She was last seen being forced into a van by two men. It was rumored that Charles and Elizabeth were having a secret affair when she vanished, but that has never been proven. The mere thought of something so sinister sends chills down my spine. I only found out about this a few weeks ago, but it has consumed all my waking moments. I need to know if it's true. I'm desperate - I can't be in love with a killer.

I throw my dog a treat as I head out the door again. My new apartment deposit cash is still sitting on the table as I leave.

The bar is filled with the typical crowd. Charles is sitting up front, he's saved a stool on his right for me and already ordered me a drink. I get a peck on the cheek as I take off my coat.

The night goes on, and we talk about nothing in particular, until we've both drank more than we care to admit. It has taken the edge off my nerves so I’m in a bolder, lighter mood. I start by asking, "Does your wife know?"

Charles looks unamused and keeps his eyes on the counter in front of him. "Know what?"

"You know..." I giggle a little in between sentences. "About us? About this?" My arms swing out wide as if to show our whole relationship.

"She isn't that involved with what I do." He is calculated in his answers.

"No kidding!" I say, stirring my drink with the straw. "We've been doing this for what... five years now?”

I don’t miss a beat, “And how long were you with Elizabeth for?"

"I think you've had too much to drink." Charles’s face is dark and distorted. I can hardly recognize him after the mentioning of her name. Is it the lighting, or is it his mask coming off to finally reveal the truth? He says, “I don’t know what you’ve been hearing, but everything you think and speculate is just bullshit!”

I’m uneasy so I try to lighten the mood, "Come on, I'm having a good time!"

Charles’s fist slams against the counter, "You ask too many questions, Anna!"

And with that, my buzzed feeling vanishes. I realize I am not out for drinks having a good time with someone I love; I am sitting next to a man I hardly know. A man with a past that haunts him, and is now growing to haunt me.

The rest of the night is a blur for me. We leave the bar together, sometime after 1AM. I remember getting back to my house and sloppily unlocking the front door. I am inside, the yellow lights humming above me. Charles is with me now. He follows me upstairs while my dog is sleeping in the kitchen. Everything is getting fuzzier - We argue some more. Why can’t you say her name?

I can't quite pick out what I've accused him of.

You're a liar, Charles Chorman, you're a killer!

Suddenly, Charles is on top of me. There is pressure on my throat. His hands - I can't breathe. I see his silhouette totally eclipsing over me. I claw and scratch at any part of his skin trying to get away. My ears are ringing. There are stars in my eyes. Did he just punch me? I spit out red. I can't breathe. I can't breathe!

I can't be in love with a killer!

Then it all goes black.

This story is real. Anna Marie Scivetti was last seen on the night of August 19th, 1998 at a bar with her longtime abusive boyfriend, Charles Chorman. Phone records indicate the two talked multiple times over the course of the day before meeting. Scivetti never had dinner with her new roommate, deposited the $1k for the new apartment, or made plans for someone to watch her dog, all behaviors her family says are highly uncharacteristic of her.

On the morning of August 20th, Chorman arrived at his place of work "disheveled, with scratches on his face and hands." At some point in the following days, Scivetti's upstairs hardwood floors were sanded down and a bathroom sink replaced. Why? Scivetti had been missing during the changes, and Chorman had the spare key to the home. Was it to cover up a murder?

Anna Marie Scivetti's family still maintains a $100,000 reward for information leading to the arrest and conviction of her killer. 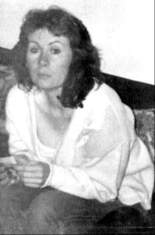